This is pretty simple: You want a raise? Get a new job

If you want a raise, then change careers.

In a post out on Tuesday morning, the Atlanta Fed reveals that its wage-growth tracker indicates that the median wage increase for someone changing jobs hit 4.3% in May, the highest reading since December 2007.

Those in the same job have seen a median wage increase of 3%.

And the key point is how it defines "job switcher" and "job stayer."

The signal here is that the labor market is rewarding those striking out to do something new or, as George Pearkes at Bespoke Investment Group said on Twitter, "The key insight is not that 'oh [the Atlanta Fed is] fudging the numbers' but rather that labor is receiving price signals."

He adds: "It doesn't really matter if someone has quit, gotten fired, whatever. Rather, if you get up and walk for any reason, you get a pay bump."

In recent months, we've noted that job openings are at a record, the quits rate is steady, and, while payroll rains have slowed, the unemployment rate is down and wages are up. The labor market, in other words, is tight and workers are in control.

As Neil Dutta at Renaissance Macro wrote in an email on Tuesday (emphasis added):

"Would rising quits and wage growth for job switchers be happening if they were worried about a stealth pool of depressed souls on the verge of coming back into the labor force to compete with them for the jobs? I don't think so. The unemployment rate drop is for real and more or less giving you an accurate read on the jobs market." 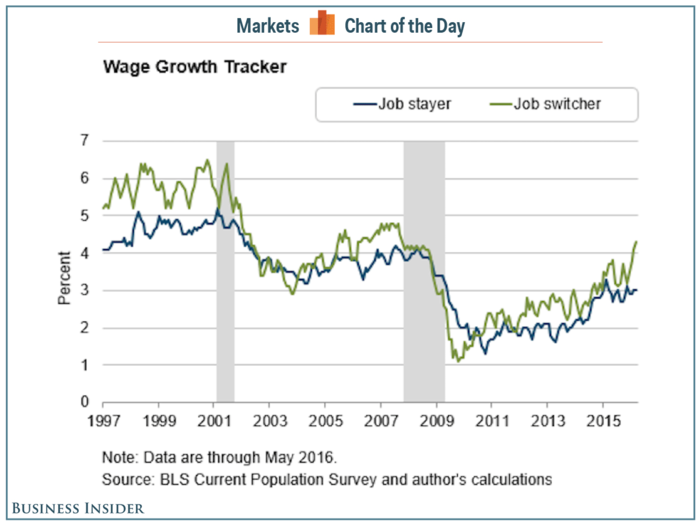 This is pretty simple: You want a raise? Get a new job
"It doesn't really matter if someone has quit, gotten fired, whatever. Rather, if you get
www.businessinsider.com
Give points: